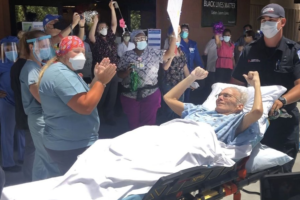 A triathlete spent 110 days in the hospital, more than any other Kaiser Permanente COVID-19 patient in Northern California.

Tom Butts, 66, is a marathoner and a triathlete, who just 2 years ago competed in the Hawaii Iron Man race.

But then COVID-19 stopped him in his tracks.

In March, Butts was hospitalized at Kaiser Permanente San Jose Medical Center and spent more than 3 months fighting for his life. He was in the Intensive Care Unit for 93 days, 87 of those on a ventilator.

The battle to beat the odds and win his life back from COVID-19 took 110 days. He was recently released from the hospital thanks to the exceptional care provided by his team of doctors, nurses, and staff.

“He had amazing determination and a fighting spirit,” said Irene Chavez, senior vice president and area manager at Kaiser Permanente San Jose. “Thanks goes to the physicians, nurses, and so many others who worked tirelessly every day and every night to get him to this day.”

Just days after he was admitted to the hospital, Butts’ doctors asked his wife to come and say goodbye because they feared he wouldn’t make it. But Butts proved them wrong. He made it through that night.

“There were times when we thought we might lose him,” said Divyesh Patel, MD, a Kaiser Permanente San Jose intensive care physician, who was part of Butts’ care team.

“Many of us have cried over him,” said Sukhvinder Nagi, MD, a Kaiser Permanente San Jose intensive care physician who also cared for Butts. “He has had a really rough course.”

Butts eventually was well enough to go home and was wheeled out of the hospital on a gurney to a transport ambulance, raising his arms above his head in the kind of victory salute that runners do at the end of their races. There was a big crowd to cheer him on, many carrying signs and applauding the Kaiser Permanente San Jose health care heroes who helped save his life. “I don’t think he’d be going home today without these nurses and doctors,” said Amanda McDermott, Butts’ daughter. “I can’t say enough for what they’ve done for him and my family, and we are beyond grateful.”

Many of Butts’ doctors and nurses were outside the hospital entrance watching as Butts’ gurney was loaded onto the ambulance for the trip home, some wiping away tears. Although Butts still has a long road ahead of him, his doctors are confident he will make a full recovery.